Broadband, water and sewer system expansion, a new elevated water tank, and improvements to Bethlehem Park were among the topics discussed at the July 18th meeting of the Alexander County Board of Commissioners.

David Moose, Compliance and Procurement Specialist, reported on the broadband internet expansion project with Open Broadband LLC. He said the project is approximately 80 percent complete, noting that the project was broken into two phases to allow for the design of infrastructure to serve the eastern and northeastern areas of the county. Phase one consisted of the installation of fixed wireless broadband equipment on the Ellendale tower site and atop Moore Mountain. Moose said the company is planning to upgrade equipment on the Ellendale tower to establish a point-to-point connection to a new location within Brushy Mountain Motorsports Park off Lambert Fork Road. As for Moore Mountain, installers experienced problems when it was discovered that the fire tower could not sustain the weight of the equipment; therefore, the company is negotiating with the property owner to install a 40-foot pole at the site. Phase one also included upgrades to the Linney’s Mountain tower site.

For phase two, Moose said that Open Broadband has been working to identify a suitable and affordable tower site in the northeastern part of the county. The company is currently negotiating with a property owner, but no timeframe is available currently. The Stony Point tower site is nearing completion and will provide service to areas in eastern Alexander County.

On a related note, Moose informed commissioners that the county received a letter on July 18 from the North Carolina Department of Information Technology stating that Yadtel/Zirrus has received a GREAT grant (Growing Rural Economies with Access to Technology) in the amount of $1,049,286.75 to provide broadband service to 305 homes and businesses in Alexander County. The county will provide matching funds of $185,168.25. Read the press release.

Josh Mitchell, Director of Public Works and Facilities, reported on the Bethlehem water tank project. He said a hydraulic study was performed on the Bethlehem water system in 2021, which showed that the system required additional water pressure – a problem that could be solved by installing an elevated water tank. The project consists of a 1-million-gallon tank, a pump station, and 2,000 linear feet of 16-inch water line. The total project cost is $5,430,7000, of which the county has received $2,065,000 in state grant funds. The remaining $3,365,700 will be paid with local funds unless additional grant money is received. West Consultants is the project engineer. Construction is tentatively scheduled to begin in the fourth quarter of 2023.

Mitchell also reported on the Bowman Court sewer project, which consists of a pump station and 6,500 linear feet of 8-inch force main for a cost of $2,109,600. Of the total cost, the county has received $1,554,000 in state grant funding, with the remainder to be paid with local funds or additional grant funds. McGill Associates is the project engineer. Construction is tentatively scheduled for the fourth quarter of 2023.

Commissioner Josh Lail, who is a Bethlehem resident, said the water, sewer, and park projects are necessary because the Bethlehem community is going to experience a lot of growth in the near future.

“There will be a significant increase in the need for water volume and sewer in the next five to 10 years with new apartments currently under construction and other potential developments in the works,” said Commissioner Lail. “As for the park, Bethlehem Park is not at the same level of quality as some other county parks. With the growth and tax base in Bethlehem, these upgrades are more than warranted. I think these plans are great, although there are a couple of things that I’d like to see added.” 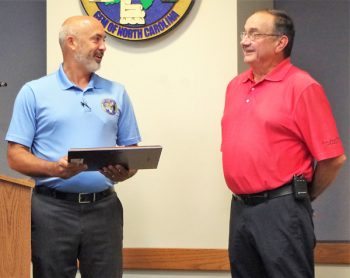 • Commissioners approved resolutions to accept the NC Department of Environmental Quality ARPA grant offer of $2,065,000 for the Bethlehem water tank project and $1,554,000 for the Bowman Court sewer pump station project.

• Commission Vice Chairman Marty Pennell presented a “Key to the County” to Tim Keever, who recently retired from Taylorsville Savings Bank and as Chief of the Hiddenite Volunteer Fire Department. Keever worked a total of 43 years at the local bank, with 26 years as president/CEO. He served a total of 49 years with the fire department, with 15 years as fire chief. He still serves as captain, secretary, and treasurer for the department. 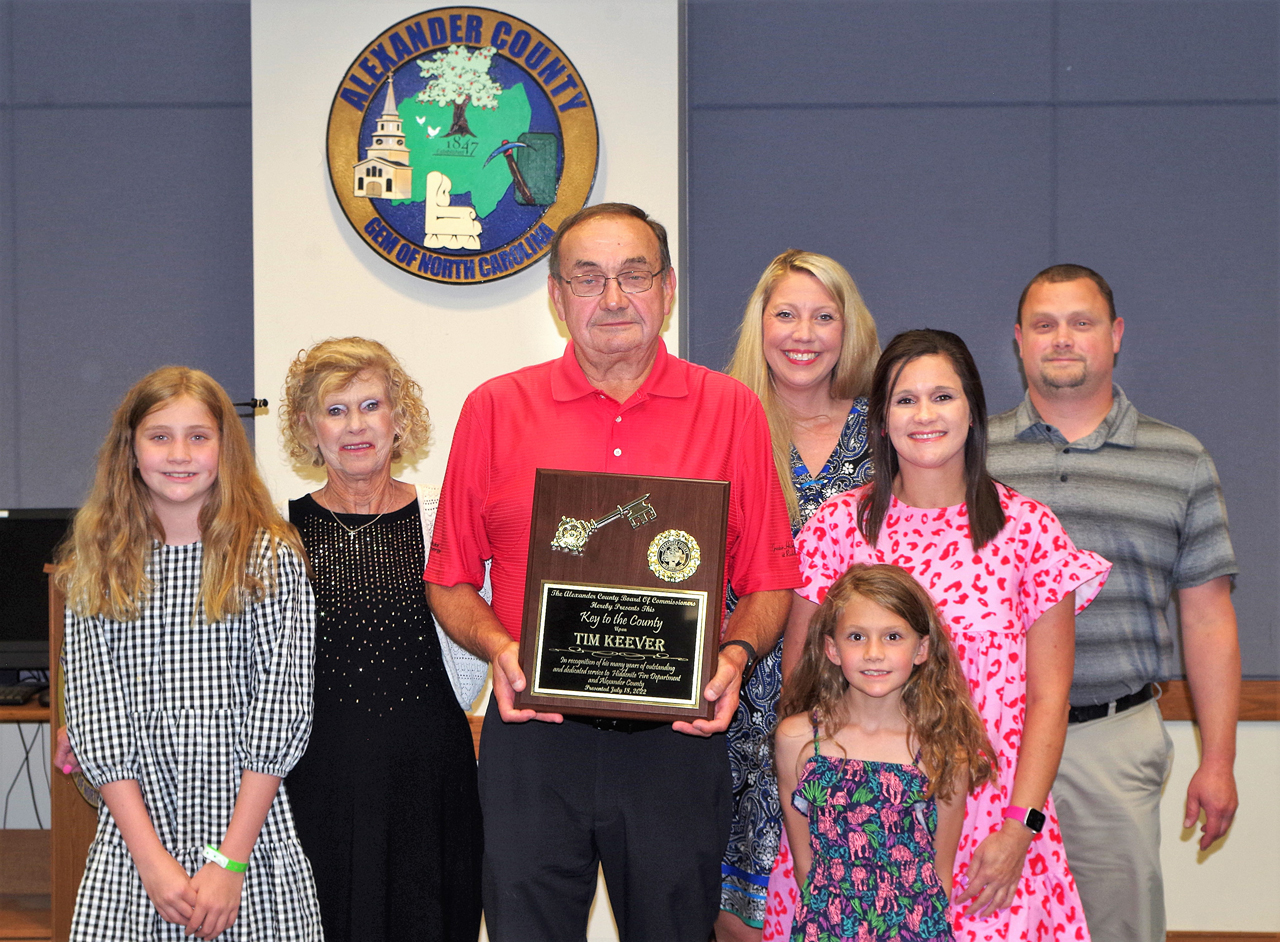 “Tim has served Alexander County with many years of hard work and dedication,” said Vice Chairman Pennell. “It is my honor to present this plaque to such a fine citizen who truly loves Alexander County.” 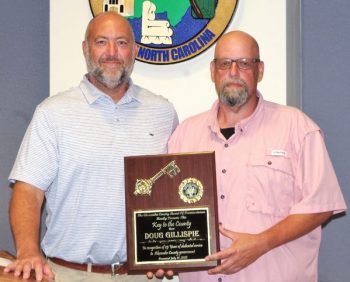 • Commissioner Josh Lail presented a “Key to the County” to Doug Gillispie, who retired from his role as Director of Public Services in May 2022. Gillispie began working for Alexander County Government as a Paramedic in February 1997. He was promoted to EMS Training Coordinator/Shift Supervisor in January 2005. In May 2014, he became Interim EMS Director and was promoted to EMS Director in September 2015. He worked for Alexander County EMS for approximately 23 years before being promoted to Director of Public Services, a position in which he supervised EMS and Emergency Services until his retirement.

“We sincerely appreciate Doug’s dedication to the citizens of Alexander County and wish him all the best in his retirement,” said Commissioner Lail.

• Mark Earle, Fire Marshal, reported that the Ellendale and Hiddenite Volunteer Fire Departments received improved fire suppression ratings from the NC Department of Insurance and the Office of State Fire Marshal. Ellendale improved to a 5/9E rating and Hiddenite improved to a 4/9E rating. The North Carolina Response Rating System (NCRRS) ranges from one (highest) to 10 (not recognized as a certified fire department by the state). The 9E rating applies to those who live outside a 5-mile radius of the fire station. While lower ratings do not necessarily indicate poor service, a higher rating does suggest that a department is overall better equipped to respond to fires in its district. Higher ratings can also significantly lower homeowners’ insurance rates in that fire district. Earle said he is awaiting the results of the survey for the Stony Point Volunteer Fire Department.

• Commissioners approved a five-year lease agreement with the Taylorsville Lions Club for $6,000 per year for the use of approximately three acres at the fairgrounds for emergency services training.

• In the County Manager’s Report, Rick French said the General Assembly approved School Resource Officers in the state budget. County staff is waiting to see the application forms, but state funds normally only pay a portion of the salary but not cars and equipment.

Mr. French said he received a letter from Senator Dean Proctor indicating that Alexander County would receive $750,000 from the state budget. He said these funds would be very helpful in filling the funding gaps for water and sewer projects.

Mr. French said discussion has begun with the NCACC regarding a local option ¼-cent sales tax that would provide funding to volunteer fire departments.

• Commissioners approved a project budget ordinance in the amount of $384,805 for the Alexander Soil and Water Streamflow Rehabilitation Assistance Program. The board also approved three budget amendments.

• The board named Commissioner Larry Yoder as the voting delegate for the North Carolina Association of County Commissioners (NCACC) annual conference in August and the legislative goals conference in November.

• Commissioners held a public hearing which was continued from the June 6th meeting to discuss the Alexander County Hazardous Materials Containment Plan. The plan was approved as presented.

The next meeting of the Alexander County Board of Commissioners is set for Monday, August 1 at 6:00 p.m. at the CVCC Alexander Center for Education (room #103). Regular meetings are recorded and can be viewed on the county’s Government Channel on Spectrum channel 192 or the county’s YouTube channel at www.youtube.com/alexandercountync. Meeting agendas, minutes, videos, and more are available on the county’s website at https://alexandercountync.gov/commissioners.