ALEXANDER COUNTY (August 4, 2021) – For the first time in several months, the Alexander County Board of Commissioners received a COVID-19 update as cases have begun to rise across the county, state, and country.

According to Leeanne Whisnant, Consolidated Human Services Director, there have been 75 positive cases in the past seven days, with 111 cases in the past 14 days. There was one additional death associated with the virus within the last month. Three people are currently in the hospital with COVID-19 complications.

“For quite some time we were seeing less than 10 cases per week, but we are definitely seeing the curve start on an upwards trend,” Whisnant said. “Our citizens need to prepare and take precautions. We still have only 36 percent who are fully vaccinated.”

The Alexander County Health Department has both the Moderna and Pfizer vaccine, and local pharmacies also have vaccines available.

“We’ve seen more people getting vaccinated in the last three weeks, but we would love to see at least 50 percent of our citizens get vaccinated,” Whisnant said. “Approximately 80 to 90 percent of the cases this past week in North Carolina are from the Delta variant.”

Those who are unvaccinated are encouraged to social distance and wear a mask when around others, especially those with underlying health conditions or compromised immune systems. 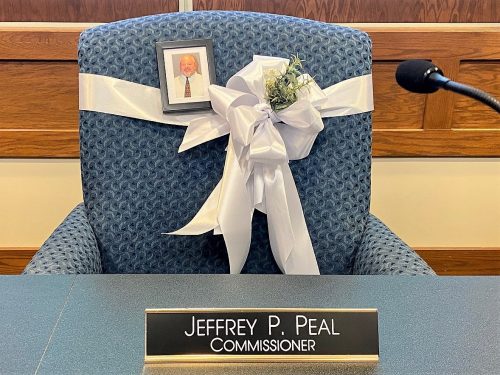 • With the seat of the late Jeff Peal empty except for a white ribbon, a flower, and his photo, Commissioners expressed their grief over the loss of their friend and colleague.

Vice-Chairman Ronnie Reese said, “I was really shocked when we got the news of the accident and the passing of Commissioner Peal. Jeff was a good friend and a good commissioner who served our county well. He will be missed greatly by all of us. Please continue to pray for his family.”

Commissioner Marty Pennell said, “Jeff was a pretty good friend of mine. In my opinion, he was a true servant to the kids and to the folks of our county. He would always help anyone he could. It was his desire to leave anyone he touched better than he came across them. He will be truly missed. We love his family greatly.”

Chairman Larry Yoder said, “Jeff was a good man who stood up for what he believed in, who made many contributions to Alexander County. He touched a lot of lives – a lot more than I would’ve ever imagined. He was a great asset to Alexander County. My prayers continue to go out to the family. This county will miss Jeff Peal.”

• Gary Herman, Public Information Officer, presented information about the “Alexander County Treasures” history book. Alexander County Government and the Economic Development Corporation entered into an agreement with Alex History Group LLC in 2012 to fund the printing of the high-quality book. A total of 2,100 books were printed at a cost of $66,232.20. Alexander County contributed $51,667.20 and the EDC contributed $14,565 to the book project, which served as a way to promote Alexander County and its rich history. Approximately 1,100 copies were sold, and about 1,000 copies have been returned to the county. Alex History Group LLC reimbursed a total of $46,018.56. The books were sold for $49.95 plus sales tax. Herman said county staff proposes selling the books for $20 each (including sales tax) at the three branches of the Alexander County Library. Chairman Yoder asked to save some of the books for future observances. Commissioners unanimously approved the sale of the “Alexander County Treasures” books for $20 each ($18.69 plus $1.31 sales tax) at the library branches and other appropriate locations, while keeping at least 12 copies for special use.

• County Manager Rick French presented a resolution authorizing the sale of 25.613 acres in the Alexander Industrial Park to Paragon Films for $600,000. The transaction was approved by commissioners at their May 24th meeting. The fair market value of the property is approximately $500,000. French said the sale will generate increased property tax revenues over the next 10 years as the property currently generates no tax revenue under county ownership. Commissioners unanimously adopted the resolution.

• Commissioners held a public hearing on a conditional use permit application submitted by Daniel and Beth Serusa. Bill Rogers, Chief Code Enforcement Officer, presented information about the application. The applicants would like to start an outdoor artist market on 2.81 acres located at 449 NC Hwy. 16 North. The market would have 30 vendor spaces and could operate two days a week from 8:00 a.m. to 8:00 p.m. Adjacent land is zoned Highway-Commercial (H-C); however, there are some nearby homes. The owners have planted trees to serve as a buffer. Commissioners requested that the port-a-jons be moved away from nearby homes. Following a brief discussion, the conditional use permit was unanimously approved by the board.

• County Manager French presented a resolution for Alexander County to accept the American Rescue Plan Act (ARPA) funds. The county will receive an estimated total of $7,283,353 and has already received $3,641,676.50. The funds are subject to all applicable federal and state laws, regulations, and guidance. The county plans to use the ARPA funds for water and sewer infrastructure.

• Chairman Larry Yoder was designated as the voting delegate at the 114th Annual Conference of the North Carolina Association of County Commissioners on August 14.

• During the public comment period, Sammy Adkins expressed his concerns about problems with the water system in the Stan De La community near Hwy. 16 South/Wittenburg Road. He said the system is approximately 35 years old and has had many water line breaks and water pressure issues. He submitted a petition with 46 signatures expressing the need to replace the water lines in that area.

• In the County Manager’s Report, Mr. French presented a sales tax update. Through April 2021 (month 11 of 12), regular sales tax revenue totaled $5,807,925.41, which is an 18.98 percent increase from the same time last year. The “new” sales tax, which is designated for economic development, public education, and community colleges, totaled $1,549,068.33, which is a 3.73 percent increase from the same time last year. French also reported that the new parking lot at Wittenburg Access Area is nearly complete. He also announced that Christine Gates, Senior Center Director, has retired after 10 years of service.

• Leeanne Whisnant, Consolidated Human Services Director, informed the board that the county has received a $400,000 dental grant from the Duke Endowment. The Alexander County Health Department will partner with Catawba Valley Community College to provide comprehensive school-based oral health care for local children, which she believes will be the state’s first collaboration between a public health department and a community college dental program. Plans are to provide services to East and West middle schools for the next two years, and then provide dental services to students in other schools. She said the program will hopefully become self-sufficient.

• Commissioners approved a change in the fee scale for the health department’s behavioral health program. The fees will now slide from 40 to 100 percent based on income, whereas prior to the change, the fees ranged from 0 to 100 percent. The change occurred due to the end of a rural health grant.

• DSS held a “Golden Opportunity Event” on June 14 for local senior citizens. The program included a presentation by Sheriff Chris Bowman on fraud prevention. Medicine lock boxes were provided by the health department. Attendees enjoyed door prizes and volunteers were recognized. Clements expressed her appreciation to businesses, organizations, and volunteers that assisted with the event.

• DSS is in the planning stages to improve foster parent recruitment. There are currently 64 children in the foster program, which is significantly higher than before the pandemic. If you are interested in becoming a foster parent, contact DSS at (828) 632-1080.

The Alexander County Board of Commissioners typically meets on the first Monday of each month at 6:00 p.m. in room #103 at the CVCC Alexander Center for Education; however, the next meeting is set for Monday, September 20 at 6:00 p.m. Regular meetings are recorded, and can be viewed on the county’s Government Channel on Spectrum channel 192 or on the county’s YouTube channel at www.youtube.com/alexandercountync. Meeting agendas, minutes, videos, and more are available on the county’s website at www.alexandercountync.gov/commissioners.