At the April 18th meeting, the Alexander County Board of Commissioners held a public hearing to consider a county parks ordinance as well as rules and hours of operation at the new Courthouse Park and fees for rental of the park and performance stage. Alisha Stamey, Alexander County Park Ranger, presented the items for discussion.

She said the information was originally shared by County Manager Rick French at the board’s March 7th meeting. The purpose of the parks ordinance is to establish and consolidate rules and regulations for all parks that are owned or operated by Alexander County Government and to maintain a clean and safe environment for all park visitors. These rules will apply to the following parks: Alexander County Courthouse Park, Bethlehem Park, Dusty Ridge Park, East Alexander Park, Jaycee Park, Rocky Face Park, and Wittenburg Access Area. 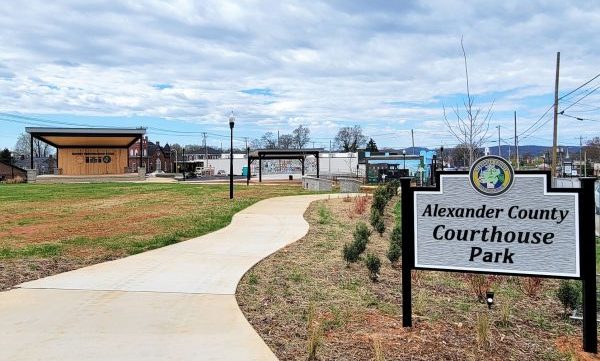 Stamey also presented proposed daily fees for renting Courthouse Park and the Rotary Performance Stage. For local non-profits and for-profits, there is no daily rental fee; however, the rental fee is $100 per day for non-profits and $200 for for-profits located outside the county. Regardless of location, there will be a $150 daily maintenance/cleaning fee plus a $300 refundable security deposit. Stamey said that emergency medical personnel and/or law enforcement may be required based on the event size at a fee of $30 per hour per person with a three-hour minimum.

Stamey also encouraged the public to attend the opening dedication and ribbon cutting for Alexander County Courthouse Park on Sunday, May 15 at 3:00 p.m. followed by a concert at 4:00 p.m. featuring Ultimate Aldean. There will be food vendors and children’s activities. Read all about it here.

In other business:
• Commissioners approved a memorandum of understanding to enter into a partnership with Spectrum to apply for a Growing Rural Economies with Access to Technology (GREAT) grant to provide broadband internet service to certain eligible unserved areas of Alexander County. If the grant is awarded, Spectrum will construct fiber-to-the-premise internet infrastructure in unserved areas of the county at a cost of $2,220,313. Alexander County Government would provide a financial match of $250,000 using funds received from the American Rescue Plan Act (ARPA). The project would bring fiber optic internet service to 390 homes.

At their April 4th meeting, commissioners approved a similar agreement with Yadtel/Zirrus. If that GREAT grant is awarded, the project cost would total $1,233,455 with a county match of $163,815 using ARPA funds. That project would provide internet service for 203 homes.

• Commissioners received an update on Duke Energy’s grid improvement project from Robin Nicholson and Avery Dolinger. Nicholson said that Duke officials met with local stakeholders in July 2021 to discuss the Taylorsville Tie circuit addition, due to its magnitude and related inconveniences to the public.

“There is a lot of work going on, with planned power outages, and some traffic situations, but in the long run everyone will be pleased as we will have a more reliable, efficient electric system with fewer and shorter outages,” Nicholson said.

Dolinger said the project has been underway for a couple of months and is scheduled for completion in October 2022. The project involves the replacement of deteriorated copper lines with an upgrade to a larger cable. Once complete, the Taylorsville circuit will tie into other circuits, resulting in shorter outages with self-healing circuits and two-way feeds. He said the most difficult portion of the project will be along West Main Avenue which will involve some power outages, a lane closure, and an impact on pedestrian traffic.

“This project will add a lot more capacity for future growth in Alexander County,” Dolinger said.

Nicholson emphasized that the project is inconvenient in the short-term, but will provide significant long-term benefits.

• In the County Manager’s Report, Mr. French said the landfill will be closed beginning April 29 at 12:00 p.m. and will reopen on May 2 at 8:00 a.m. The closure will allow for repairs to the transfer station floor. He invited the public to RockyFest on Saturday, April 23 from 10:00 a.m. to 4:00 p.m. at Rocky Face Park. Mr. French also invited citizens to the opening dedication and concert at the new Alexander County Courthouse Park on Sunday, May 15 beginning at 3:00 p.m. He noted that May 25 marks the 10th anniversary of Rocky Face Park.

The Alexander County Board of Commissioners typically meets on the first Monday of each month at 6:00 p.m. in room #103 at the CVCC Alexander Center for Education. The next meeting is set for Monday, May 2 at 6:00 p.m. Regular meetings are recorded, and can be viewed on the county’s Government Channel on Spectrum channel 192 or on the county’s YouTube channel at www.youtube.com/alexandercountync. Meeting agendas, minutes, videos, and more are available on the county’s website at https://alexandercountync.gov/commissioners.